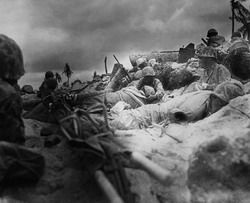 Researchers have used ground penetrating radar in addition to hours of painstaking research to identify the graves of 139 US Marines killed on the South Pacific atoll of Tarawa. The Battle of Tarawa was a particularly bloody one with approximately 1,000 Marines killed and nearly 2,300 wounded in addition to 687 casualties from the US Navy. The Japanese soldiers were firmly entrenched in concrete bunkers and were “well supplied and well prepared and fought almost to the last man”. Many of the dead were buried on the island in marked graves, but the small island became an important air base and many of the markers were moved and eventually forgotten. (Photo by USMC, Marines take cover behind a sea wall on Red Beach #3, Tarawa. November 1943.)

Mark Noah raised the money for the investigations to search for the remains of US soldiers through his nonprofit, History Flight, which charges for rides in vintage aircraft. This will hopefully be the first step in bringing these brave soldiers home for a proper burial at Arlington National Cemetary.

Archaeologists using high-resolution ground penetrating radar (GPR) have located a massive collection of stones less than 3 km from the well-known Stonehenge site. This grouping of 90 stones, up to 4.5 meters tall (14.7 feet) […]

March 10, 2014 rockman Geoarchaeology Comments Off on Radar survey of Egypt’s Valley of the Kings opens up new possibilities for lost tomb finds