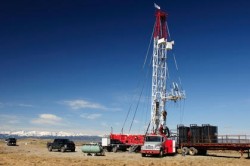 The Texas Railroad Commission issued preliminary findings saying that the hydraulic fracturing wastewater injection well operated by an Exxon Mobil subsidiary was not to blame for earthquakes that shook Reno, Texas in 2013 and 2014. From the Manufacturing.net article:

Commission investigators concluded that a well where Exxon Mobil subsidiary XTO Energy pumps millions of gallons of the wastewater likely didn’t cause the quakes, but also said there wasn’t enough evidence to demonstrate the earthquakes were naturally occurring. Parties have 15 days to respond. 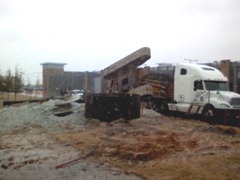 An excavator mounted drill rig drilling shafts as part of a project to pass utilities under I-35 near 51st Street toppled over while trying to move in soft, rain soaked soil. The Austin Fire Department was able to extract the operator from the cab and he was taken to a local hospital with minor injuries, a minor miracle. I’m not sure what the purpose of the drilled shafts were for. Since the project was for some kind of utility pipe jacking under the freeway, I’m speculating it was drilling holes for temporary shoring for the jacking pit or something along those lines. I’m sure OSHA will be looking into the incident. Video news story after the break. (Photo from Austin KXAN.com).

A 200-ft plus diameter sinkhole, about 50-ft deep opened up about 75 miles southwest of Lubbock, Texas, near Denver City on Monday, 7/27/2009 at 11pm. Check out the video below which is basically some aerial still photos. Credit to Geology.com. (Image from KCBD Video) […]

A new portion of the Freeport, Texas Wharf was meant to allow an additional two container ships to be unloaded each day. However, before it was put into service, the entire 800 foot by 109 […]