Seven borings, up to 140m (460-ft) deep, were advanced by a specialty contractor to install geothermal probes for heating of the town hall. This was planned to be a prestigious project for the municipality utilizing renewable energy. However, shortly after finishing the drilling, cracks appeared in the recently renovated town hall. First the cracks were attributed to drying of the plaster after renovation, but cracks increased and neighbors started complaining about the same observations in the surrounding buildings (some of them up to 600 years old).

A geotechnical expert was hired to investigate the problem.  At this point, it is assumed that the drilling operations may have triggered the settlement. In approximately 32m (105-ft) depth, the drilling company encountered an artesian aquifer. The investigator indicated that even though the boreholes were cased, water may still migrate upwards, which may change stresses in the ground. It is planned to advance another 60m (195-ft) deep boring to obtain a subsurface profile and to perform additional investigations into soil permeability and stress distributions. 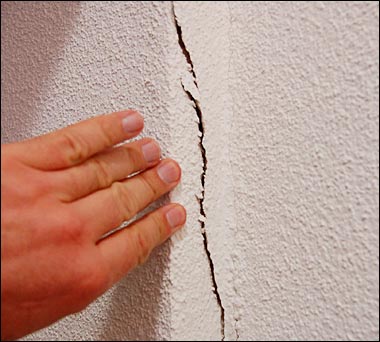 October 19, 2010 rockman Available Resources Comments Off on New Mobile Exploration and Geothermal Drill Rig Reportedly Most Powerful of Its Kind

The Globe Drill GT3000 mobile drill rig takes about two semis to haul, but can drill holes as deep as some oil and gas rigs that take 40 or 50 semis to move. It has […]