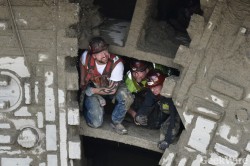 After tunneling 9,270 feet under downtown Seattle, the Bertha tunnel boring machine finally broke through at the north portal yesterday. The breakthrough marks a major milestone in the project to replace the seismically deficient SR-99 Alaskan Way Viaduct. The 57.5 foot diameter machine started tunneling in July of 2013, and I was fortunate enough to take a tour of it shortly after that. The Seattle Tunnel Partners team ran into some major problems in January of 2014 when they encountered an 8 inch well casing which damaged a seal inside the cutterhead which ultimately required the creation of an access pit and the replacement of the entire cutterhead.

Although the tunnel drive took two years longer than anticipated, and some significant cost overruns, this remains one of the most amazing engineering achievements of our lifetime! I highly encourage you to check out the article I wrote about the tunneling project and all of the interesting geotechnical features that go along with it after my tour of the project site. And you can check out my photos from the tour at the GeoPrac.net Facebook page. While you are there, give us a like! [Source: Read the full blog post from WSDOT. Image: GeekWire / Kevin Lisota]

Jet grouting in Queens for MTA East Side Access Project

Tunnel Boring Magazine has this synopsis of the project: The East Side Access project in New York City involves some of the most complex civil construction in recent years. The project involves constructing new tunnels […]

Drill and Blast and Tunnel Boring Machine are two common types of tunnel construction methods. But roadheaders have been around for many years, getting their start in the coal mining industry. So where do they […]