I came across this interesting product for structural/geotechnical monitoring of cracks in 3 dimensions.  Most crack monitors are designed for monitoring in 2 dimensions, this one can measure movement out of the plane of monitoring.  I like that the markings are laser-etched so the simple device should last for a long time.  Price is $40/each from Quality Plus Engineering, LLC.

The Redi-Rock Design Resource Manual or DRM has everything you would need to design a Redi-Rock retaining wall, including block sizes, design charts, construction details, and setback options.  The manual also includes case studies and […] 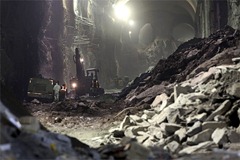 The ADSC/IAFD has produced a safety video on Micropile & Anchored Earth Retention. It’s sure to be a great training video for contractors, but it is also a great resource for engineers and inspectors who […]