Rather than building a ground model and generating 2D sections and 3D fence diagrams from it, the new software turns the process on its head, allowing engineers and geologists to create and edit sections, automatically updating the fence diagrams and the AutoCAD Civil surfaces in the model.

“3D fence diagrams were added to HoleBASE SI Extension for Civil 3D in 2017, allowing dynamic sections to be created as changes were made to the 3D model. However, users told us they found it easier to draw in 2D when developing 3D models and not the other way round, so we wanted to come up with a solution to help.

“We believe this is a real game-changer. The new software will allow engineers and geologists to visualise and understand subsurface data much faster. As a result, it can be used on smaller projects, where time restrictions often preclude this type of approach.”

The new features were developed as part of the joint Keynetix and British Geological Survey BIM for the subsurface project, funded by Innovate UK.

“This places geological modeling back in the hands of the geologists,” said BGS Team Leader of Geological Modelling Systems and Innovate UK team member Holger Kessler. “The easy-to-use interface means models can be built easily, without much knowledge of AutoCAD, which is a great step forward.”

Keynetix is preparing to restart their popular free webinar series.  The theme for 2016 is “Transforming Your Geotechnical Data Journey in Small Steps.” The webinars will be every Friday at 12 pm EST for North […]

The Case for BIM in Geotechnical Data

November 18, 2014 Gary Morin Articles, Software and Spreadsheets Comments Off on The Case for BIM in Geotechnical Data 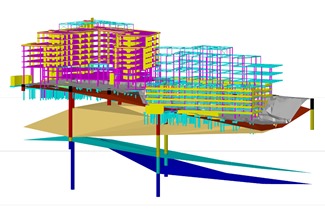 Getting the Message Across

Applying Building Information Modelling principles to geotechnical data will reinforce the message that geotechnics is an integral part of every phase of a project – not just site investigation, argues Gary Morin, Technical Director, Keynetix.

[Editor] In this contributed article, Gary describes the justification for using BIM for geotechnical data.  Among those benefits are the ability to perform detailed alternatives analysis and optioneering, reduction of risk during construction, and the ability to perform cost-effective repairs and maintenance during the lifetime of the geotechnical asset. Click through to read the full article. Keynetix is a sponsor of GeoPrac.net. [/Editor]

A good way to begin building a business case for investing in new software and systems is to evaluate the time and cost in carrying out a typical task, such as producing site plans and […]