Odenton, Md. (Vocus/PRWeb) April 23, 2007 — Hayward Baker, Inc., North America’s leading geotechnical contractor, announces the completion of an ambitious landslide repair project for the Mississippi Department of Transportation. The work was conducted along a stretch of U.S. Highway 61, one of the nation’s landmark roads that extends from the Canadian border to the Gulf of Mexico. 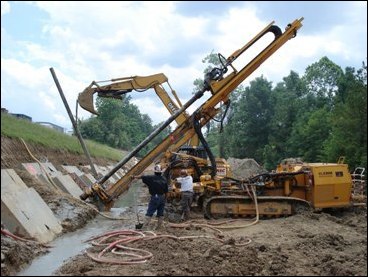 The purpose of the work was to stabilize a failing slope that had caused the closure of both southbound lanes of U.S. Highway 61 at Signal Hill on the outskirts of Vicksburg, Mississippi. As general contractor for the project, Hayward Baker installed more than 250 buried anchor blocks to stabilize the slope. The project is noteworthy because of the size of the slide (some 1,300 feet) and the depth of the slide plane below the surface, which necessitated the use of the sophisticated anchoring technology and drilled tiebacks as long as 265 linear feet.

Evidence of landslide activity had been observed at Signal Hill as early as 1977, shortly after completion of the roadway. An earthen berm was constructed initially, which reduced the rate of movement. There was also a trench drain-type system installed in an attempt to remove water that had collected under the roadbed in the fill area.

According to Jeff Curtis of the Mississippi Department of Transportation, over the course of the next 25 years the roadbed would sink as much as four feet on occasion, requiring extensive repairs. But with continuing (and increasing) incremental movements being detected, in 2004 the Mississippi DOT contracted with Burns Cooley Dennis, Inc. (BCD) to investigate, evaluate and recommend a new stabilization system.

A permanent ground anchor/buried anchor block system was recommended by BCD due to it being highly-suited to the site. This recommendation was approved by the Mississippi DOT, and the contract was awarded to Hayward Baker to undertake the project following a bid process.

According to Steve Buckner, special projects manager at Hayward Baker’s Atlanta office which performed the repair work, Hayward Baker was one of several members of the design/engineer team assembled by BCD on the U.S. Highway 61 project. Other participants were ABMB Engineers, Inc., Advanced Engineering Resources, Inc., and the Mississippi Department of Transportation’s own geotechnical branch. "The project was a great success," Buckner remarked. "The MDOT manager reported that he had never worked with a more professional organization than Hayward Baker."

Jeff Curtis, the Mississippi DOT’s designated project engineer on this job, expressed strong satisfaction with the work performed by Hayward Baker. "They’re a very professional group – top-notch. They didn’t have any problem finishing the job on time, even when we … had to add another 100 feet of anchors to get to the end of the slide. That included needing to obtain a right of entry from an adjacent landowner. The entire process went as smooth as it could go," he said.

Because of the Signal Hill project’s noteworthy design, BCD received the 2007 Grand Conceptor Award from the American Council of Engineering Companies – Mississippi (ACEC-MS). The award was given at the annual ACEC-MS Engineering Excellence Awards banquet held on February 21, 2007 in Jackson, Mississippi.

About Hayward Baker, Inc.
Hayward Baker, Inc. is North America’s largest geotechnical contractor. Ranked by ENR magazine as the #1 Foundation Contractor, Hayward Baker is the industry leader in applying ground modification technologies to site improvement and remedial work, with a 60-year record of experience. Many different technologies are employed in providing foundation support and rehabilitation services, as well as settlement control, structural support, site improvement, soil and slope stabilization, underpinning excavation shoring, earth retention, seismic stabilization, and ground water control. Every service provided by Hayward Baker is designed to be the most effective, cost-efficient solution based on a proven track record of performance in the field. Services are provided through a network of more than 20 offices. Web site address: www.haywardbaker.com.