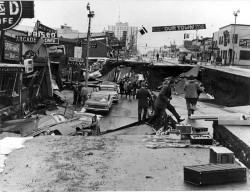 The 1964 Alaska Earthquake was 9.2 in magnitude and caused dramatic destruction and dramatic examples of surface rupture, subsidence, and liquefaction. New paleoseismic evidence points to a previously unknown earthquake that happened on the same fault segment approximately 500 years ago. This new evidence would change the recurrence interval for the earthquakes on the Alaskan megathrust fault, which would affect seismic hazard in Alaska, but could also increase the tsunami hazard in places as far away as California and Hawaii. [Source: EARTH Magazine via AEG Insider. Image: Wikipedia]

Seattle’s Alaskan Way Viaduct and Seawall Replacement Project is a political lightning rod, but this amazing simulation video released by WSDOT underscores what COULD happen if a significant earthquake struck the Seattle Downtown Waterfront area.