The First-Order Second-Moment (FOSM) method based on the first two moments, i.e., mean (μ) and variance (V=σ2), of the data for a random variable can be used to develop analytical closed form solutions for relationships between β and Pf.  Such solutions are widely published in the open literature, e.g., Whitman (1984), Withiam, et al. (1998), Haldar and Mahadevan (2000).  Figure 2.1 shows the relationship between β and Pf based on the FOSM approach  for a normally distributed load and resistance and a log-normally distributed load and resistance.  In some publications (e.g., Paikowsky et al., 2004) the â€œnormalâ€ distribution relationship in Figure 2.1 is referred to as an â€œexactâ€ relationship.  The log-normal relationship in Figure 2.1 is approximate and valid for 2 < β < 6 (Rosenblueth and Esteva, 1972). 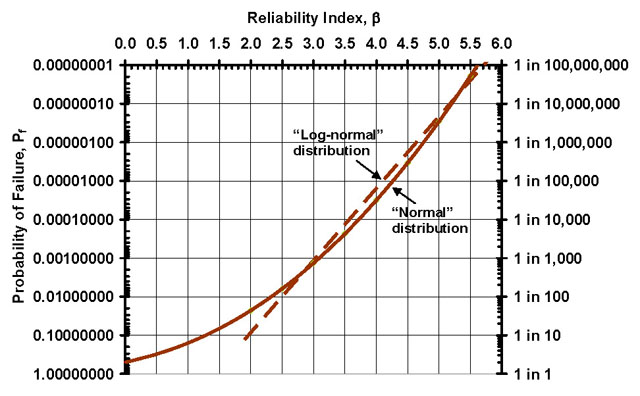 Figure 2.1.      Relationships between β and Pf for the case of a single load and single resistance.

Both normal and log-normal relationships yield approximately the same β (≈ 5 to 5.7) at the practical upper limit of the probability of failure between 1 in 5 million to 1 in 100 million; such values of β may be applicable to extremely critical works such as nuclear facilities.   The two relationships continue to be reasonably similar for β > 2.5 while they diverge significantly for β < 2.5.  As discussed in Section 4.0, the target reliability index, βT, for substructure design is usually between 2.3 and 3.5.  For this range of β-values, the two relationships are practically similar, see Figure 2.2.

Instead of the reliability index one may choose to express Pf as the probability of survival, Ps.  The value of Ps in percent is obtained from (100)(1- Pf) where Pf is expressed as a decimal.  In addition to Pf, the value of Ps is also shown in Figure 2.2.  Since the values of Ps are well above 90% in the zone of interest for subsurface design as shown in Figure 2.2, the probability of survival can be used just like the reliability index to avoid the negative connotation of the word â€œfailure.â€ 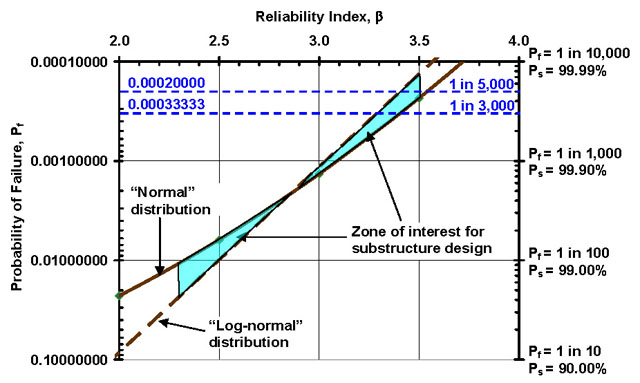 Figure 2.2.      Relationships between β, Pf and Ps in the range of interest for substructures for the case of a single load and single resistance.

2.2 Cases of Multiple Loads and Resistances with Non-normal Distributions

For cases where multiple loads and multiple resistances with varying non-normal distributions are evaluated, relationships such as those shown in Figure 2.1 may not be possible without significant simplifying assumptions in the FOSM approach.  In such cases, numerical simulation techniques may be used to determine the probability of failure and the corresponding reliability index.  The problem may then be evaluated without simplifying assumptions thus leading to more realistic results.   Many numerical simulation techniques to perform reliability analysis are available and published, e.g., see Law and Kelton (1991), Haldar and Mahadevan (2000).   The Monte-Carlo simulation technique works well with the overall LRFD approach since it has the capability to evaluate random events; this technique is briefly discussed next.

The NCHRP has released a new Subsurface Investigation Manual to update the 1988 AASHTO Manual of the same name. Imagine trying to capture every change in technology, methods, and approaches to geotechnical investigations from the […] 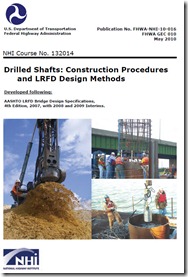 The FHWA has released for download a comprehensive update to the 1999 O’Neil and Reese manual “Drilled Shafts: Construction Procedures and Design Methods”, lovingly referred to in the industry as the “Brown Book” or the “Drilled Shaft Bible”.  This 2010 manual from the National Highway Institute (NHI) of the FHWA is entitled “Drilled Shafts: Construction Procedures Procedures and LRFD Design Methods” and was authored by Dan A. Brown, Ph.D, P.E. of Dan Brown and Associates, John P. Turner, Ph.D, P.E. of the University of Wyoming, and Raymond J. Castelli, P.E. From an FHWA Memo on the manual:

Distributed with this memorandum is the publication entitled "Drilled Shafts: Construction Procedures and LRFD Design Methods" (FHWA-NHI-10-016). This manual is the reference text used for the National Highway Institute (NHI) course numbered 132014 on Drilled Shafts. The publication will become the tenth in the series of geotechnical engineering guidelines called "Geotechnical Engineering Circulars." Geotechnical Engineering Circular (GEC) No. 10 is prepared as a significant revision and update to "Drilled Shafts: Construction Procedures and Design Methods" (FHWA IF-99-025), and reflects the standard of practice for the design, construction and inspection of these features. The guidance is developed following Load and Resistance Factor Design (LRFD) procedures and will enable engineers to identify and evaluate technical feasibility and potential applications. The text is developed with a sufficiently broad scope to be of value to a wide range of transportation specialists responsible for assisting with selection, design, development of materials specifications, construction monitoring, and contracting methods for Drilled Shafts.

Click through for the download link and some preliminary comments on what has been updated in this significant new publication in the drilled shaft construction industry as well as the geotechnical engineering profession.