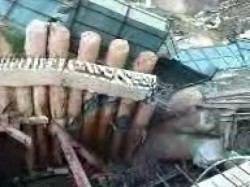 This retaining wall failure occurred in Kuala Lumpur, Malaysia in 2009. The failure was caught on video, albeit with a crappy camera phone. But it’s well worth a look! Dave Petley of the Landslide Blog also tracked down an article on the original failure. It’s the usual case of chicken or the egg. Did the water pipe failure cause the wall to fail, or did the wall fail and then cause the pipe to fail. Thanks to my colleague Bob Cummings of Saguaro Geoservices for sending this my way.

Carolina Sunrock constructed a new primary crusher and needed a 51 foot tall retaining wall to create the grade separation.  They went with a Redi-Rock faced wall, and were in the unique position to buy […]