Identification of the target reliability index, βT, is an important step for every owner because the cost of the structure is affected by this value.  Even though in Figure 2.2, the relationship between Pf and β appears to be linear in the range of interest, it is actually non-linear because the Y-axis is plotted on a logarithmic scale.  The relationship between the cost of a structure and the β value will increase non-linearly with the exact nature of the non-linear relationship being a function of whether the concept of reliability index is applied at the component level or system level.  The decision to apply the reliability index to the component or the system level is not an easy one and is a function of many factors including, but not limited to, redundancy at the component level, variability of site stratigraphy, construction techniques, and human errors.  Discussion of the various factors that can affect the reliability index is outside the scope of this article.

Accurate data on actual failures are difficult to compile because systematic databases of failure records do not exist (Leonards, 1982).  This difficulty is further compounded by the general hesitancy of agencies and owners to share data on failures.  Several regulatory agencies for critical facilities such as dams and nuclear plants have adopted the frequency-consequence chart (also known in the published literature as â€œF-Nâ€ chart) as a convenient graphical tool for characterizing exceedance probability of risks against their associated consequence, e.g., society’s tolerance for loss of life and property.  Figure 4.1 shows a typical F-N chart.  Both the vertical and horizontal axes are plotted on a logarithmic scale.  In geotechnical engineering, the guidance derived from F-N charts is usually qualitative (Baecher and Christian, 2003).  Baecher (1987) presents the information in Figure 4.1 as an example of empirical probabilities of failure for civil engineering facilities.  The envelopes marked â€œacceptedâ€ and â€œmarginally acceptedâ€ reflect risks inferred from the civil works shown in the figure (Baecher and Christian, 2003).  Figure 4.1 shows the expected trend that as the possibility of loss of life increases, the facility is designed for lower probabilities of failure. 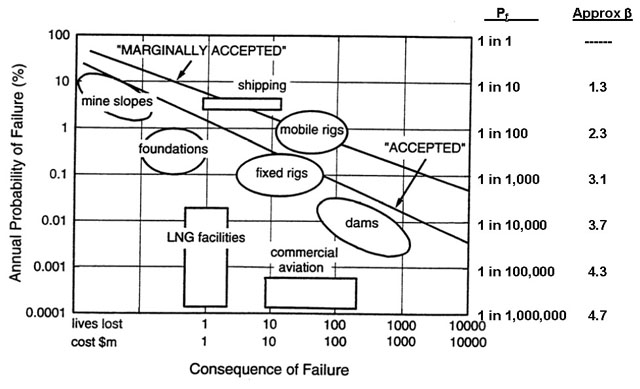 Based on a review of published information similar to that presented in Figure 4.1, Phoon, et al. (2003) indicate that the theoretical probability of failure is one (1) order of magnitude smaller than the actual rate of failure.  Using this adjustment and Figure 4.1, Phoon, et al. (2003) indicate that the currently accepted theoretical probability of failure for foundations is between 0.01% (1 in 10,000) and 0.1% (1 in 1,000), which corresponds to β values of 3.1 and 3.7, respectively, as shown in Figure 4.1.  Indeed, the AASHTO-LRFD approach is based on this range of β-values as noted below:

The above values of β are based on the strength limit state only (other limit states have not yet been calibrated based on probability).  Furthermore, these values are at the component level and do not take into account the redundancy of the components in the total system.  For example, if one pile in a group of 20 at a given substructure element fails, does that mean that the substructure element or the bridge it supports would fail?   This may be unlikely because traditionally all piles in the group are designed to carry the load assumed to be applied to the most heavily loaded pile and thus some redundancy will usually be present in substructure design.

4.1 Consideration of Redundancy in Substructure Design

For the case of a single shaft foundation supporting an entire bridge pier, Allen et al. (2005) recommend the use β ≈ 3.54 (or Pf  ≈ 1 in 5,000 using normal distribution curve in Figure 2.2). The β values cited above are at the component level.  As noted earlier, the β value of the whole system may be considerably higher than that for the component level where redundancy is present.  For example, as noted earlier, a value of β = 3.54 is commonly used for strength limit state evaluation of structural components such as steel girders and prestressed concrete girders.  In comparison at the system level, i.e., for the whole girder bridge, Allen et al. (2005) note that one can have β > 5.5 which is equivalent to Pf ≈ 1 in 50 million based on Figure 2.1.  This is because of the effect of redundancy at the component level is compounded into a larger redundancy at the system level.

In general, the resistance factors in AASHTO (2007) for deep foundations have been calibrated for β = 3.0 (or Pf  ≈ 1 in 1,000 assuming normal distribution of limit state condition).  For non-redundant systems, e.g., single shafts, AASHTO (2007) recommends reducing the resistance factor by 20% to account for the recommended β value of 3.54.  AASHTO (2007) provides similar additional recommendations on modification of resistance factor for driven pile foundations based on the number of piles as well as site variability.  The final selection of a target reliability index, βT, for a given limit state should take into account the importance of the structure, reliability at both the component and system level as well as the redundancy in the system.  The facility owners should carefully evaluate these issues while selecting the target reliability index, βT.  As part of this process, the facility owners should retain the services of knowledgeable structural and geotechnical specialists and ensure a close interaction between these specialists as discussed in NCS (2007).

The current edition of the AASHTO LRFD Bridge Design and Construction specifications do not have specifications for soil nail retaining walls. This TRB publication is meant to be an interim solution for agencies who still […]

States Forced to Delay Millions of Dollars in Highway Contracts

A report titled ‘Falling Weight Deflectometer Calibration Center and Operational Improvements: Redevelopment of The Calibration Protocol and Equipment’ has been published by the FHWA. This report is the result of a pooled fund study that […]