On the Radwaste blog by Geoff, I read about Borehole Disposal of Sealed Radioactive Sources or BOSS. This technology, which is explained by the International Atomic Energy Agency (IAEA) consists of disposal of smaller quantities of radioactive waste in specially engineered boreholes 30 to 100-m (approx. 100 to 330-ft) deep in suitable geologic media. Read on for more info. (Diagram by IAEA) 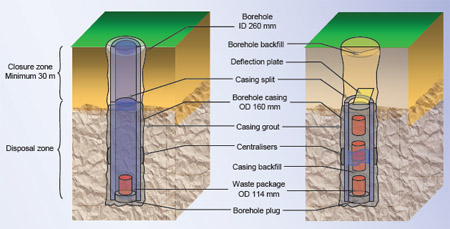 Parsons Brinkerhoff will provide ‘technical support’ for an underground nuclear waste repository in the UK after signing a contract with the UK’s Nuclear Decommissioning Authority (NDA). No details are available yet on the plan or […]