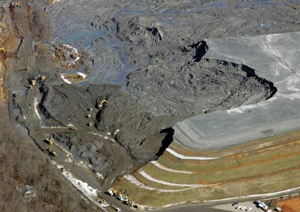 On December 22 of 2008, there was a massive failure of a fly ash landfill (tailings dam?) at the Tennessee Valley Authority’s (TVA) Kingston power plant. The failure caused a torrent of coal ash sludge to blanket an area of approximately 300-acres although remarkably no lives were lost.

The Tennessean newspaper (hat tip to ASCE Smart Brief) had a very nice article yesterday containing information about previous studies done at the site and how there was a small failure of the same slope (or one nearby) several years earlier. The TVA reportedly rejected a costly $25-million plan to convert the “wet” fly ash storage system to a dry cell system for the landfill. The cost of the cleanup will likely exceed that amount.(Photo by Sanford Myers/The Tennessean)