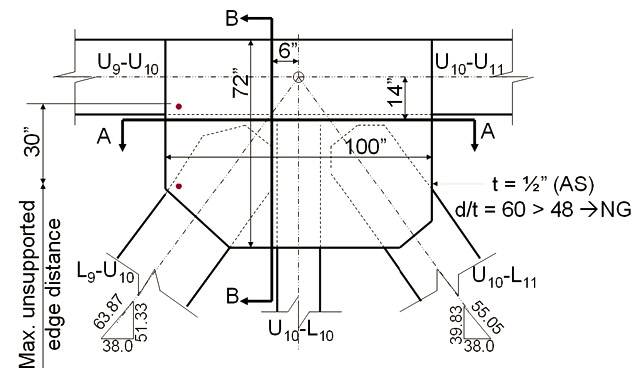 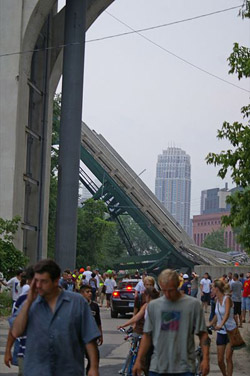 Just because this event did not have anything to do with geotechnical engineering, it doesnâ€™t mean we should not take it as a reminder of what could happen. This type of failure is my absolute worst fear as a practicing engineer. It was not only a catastrophic failure of the structure, but a tragic loss of life. I take my profession very seriously, especially my obligation to serve the interests of the public. This is why I decided to join the Order of the Engineer and why I wear the ring on my pinky as a symbol of that obligation.

If you are an engineer and are not familiar with the Order of the Engineer I encourage you to look into it and to see if there is a link (chapter) near you. At the ring ceremony there was a story I was told about the origin of the ring (which incidentally Wikipedia says is not true). The story was that the original rings were made of iron from the Quebec Bridge that collapsed in 1907 as a result of poor engineering, killing 75 construction workers. The parallels between that story, true or not, and the I-35W bridge collapse are rather symbolic for me.  Despite the story being false, the ring is still a symbol of the ethical responsibility I have to practice in the best interests of the public. 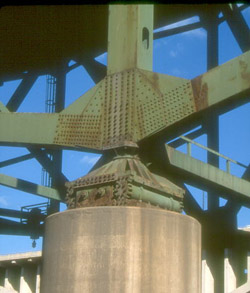 Clearly I am not a structural engineer, but I have a very hard time understanding why this design deficiency was not caught during a review process. First of all, the original designers (Sverdrup & Parcel, since acquired by Jacobs) should have had some form of internal review. Then there had to have been a reviewer for the State. So somehow this error made it through and the bridge was constructed.  I guess I can imagine something sneaking through like that. (Photo of Gusset Plate at Southwest pier in 1996)

However, as you may have heard, the bridge had gone through two major renovations, one in 1977 and one in 1998. As a part of these renovations, the deck thickness was increased from 6.5 to 8.5 inches and the center median barrier and outside barrier walls were increased in size. During these modifications the bridge structure would have been evaluated for the increased loads, why did they not look at the gusset plates? The NTSB letter indicates that they could not find all of the original design calculations. If you were checking the bridge for these additional loads and you were missing calculations from the original designer, wouldnâ€™t you want to go and check everything yourself? Especially since this bridge was termed â€œfracture criticalâ€ or â€œnon-load-path-redundantâ€, meaning that â€œa failure of any one of a number of structural elements in the bridge would cause a complete collapse of the entire bridge.â€ The NTSB letter provides this (in my opinion) rather weak explanation for failing to catch the deficiency during the 1977 or 1998 reviews:

In addition, gusset plate design calculations are not usually reviewed during major modifications on bridges. Generally, the weakest point of a bridge is evaluated to determine if the additional loads or stresses can be accommodated, with the assumption that the remaining portions of the bridge can withstand the change. For example, as previously mentioned, the accident bridge underwent two major renovations, which added significantly to the overall weight of the structure. Information obtained from Mn/DOT indicates that Mn/DOT engineers followed generally accepted practice and recalculated the anticipated stress levels in what they believed at the time were the weakest members of the bridge. Normally, there would be no reason for them to question the strength of the gusset plates relative to these weaker structural members.

So what do I personally take away from this tragedy? First and foremost, I have a renewed sense of the responsibility I have in my day to day work as an engineer. As I write this, I am on my lunch break and when I come back I will be working on reviewing a set of drawings and calculations submitted by a MSE retaining wall vendor for a freeway widening project currently under construction. I canâ€™t tell you how tedious this can be, wading through a stack of their spreadsheet runs and looking at sheet after sheet of drawings and performing my own parallel calculations. But every time I find myself getting tired of it or wanting to take a shortcut, I just think about failures like the I-35W bridge. Even when I am out standing behind a drill rig classifying soil samples or counting blows of the hammer, I think about how that information will be used to design a foundation for a bridge or retaining wall or other structure that someoneâ€™s life might depend on and it helps to keep me focused.

And what about the failure of the review process to prevent the failure of the bridge? The company I work for does quite a bit of review of other engineerâ€™s designs, primarily on behalf of state or local transportation departments. I am very fortunate that the corporate culture here is one of meticulous attention to detail and a firm belief that nothing should ever leave our office without being thoroughly checked by someone else. In fact one of our principals is a retired Civil Engineering professor with a long and distinguished consulting career as well. He is known for his incredibly thorough reviews of our reports and calculations. We even joke that he signs the company Christmas cards in red ink! 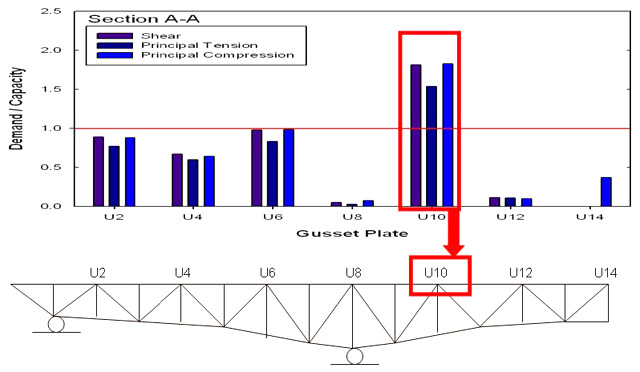 I know for a fact having observed it first hand, that not every engineer and firm has the same dedication. I have heard people say things like â€œitâ€™s not my stampâ€ in reference to drawings or calculations. While they may be technically correct in the sense that the bulk of the liability for any failure would lie with the designer, the reviewer would not be entirely without liability in the legal sense, and they would DEFINITELY not be free of ethical and moral obligations. Granted, not every project is a â€œfracture-criticalâ€ bridge 108-ft over a river, but that is no excuse for not performing proper reviews. 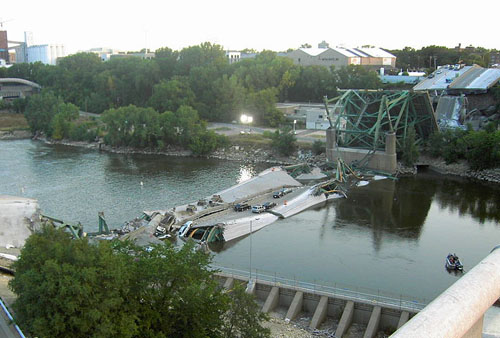 The original I-35W bridge was designed in the early 1960s. Even a very young engineer who might have had some part in the design of the bridge would be at least in their mid-70s now. And likely the more senior engineers responsible for the overall design or the review would be even older if they are still alive. But imagine if it was you and that you were still alive. You would have been retired for a number of years now, probably in the twilight of your life. Before the collapse you probably looked back with pride on the many unique and challenging projects you had worked on throughout your long career. Now imagine the guilt you would feel at having been partially responsible for the death of 13 people, and an altered life for many of the injured people to say nothing of the profound economic and psychological impacts the collapse caused. Your entire professional career would be tarnished, no matter how prestigious it was.

I donâ€™t claim to be perfect, far from it. In engineering as in life, we are only human and so were the engineers involved in this tragedy.  But I pray that this kind of failure never happens in my career. If it does, I hope that I can look back at the work that I did and say that I did everything I could have done and met all of my moral and ethical obligations to the profession, to the public, to myself and to my God.

In July of 2005, cracks began forming in the concrete dam that created Duke Lake in Ryerson Station State Park in Pennsylvania that required officials to drain the 62-acre lake. The state’s Department of Environmental […]

A crane setting girders for a bridge in New Zealand toppled over as the temporary embankment it was sitting on gave way. [Source: The Landslide Blog. Image: Vertical.net]