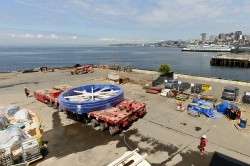 The Bertha TBM just received a shipment of spare parts to repair the giant tunneling machine. The manufacturer decided to redesign the seal system to make it easier to access from the inside, if necessary. That’s probably a good idea considering the prospect of a repair like this one once the machine is moving beneath downtown Seattle. Other improvements and repairs to the TBM include:

A TBM is stuck on a 2.85m diameter stormwater tunnel in Lancashire, UK. The tunnel is planned to be 3.5-km long, but has been stalled since November when the silt intrusion stopped the tunnel boring […]

Malcolm Drilling is currently working on shoring for the foundation excavation of a new tower at Rainier Square in downtown Seattle.  The structure will be a 58-story mixed-use skyscraper topping out at 850 feet, which […]