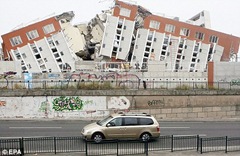 A magnitude 8.8 earthquake struck Chile on Saturday, centered about 200 miles southwest of the capital, Santiago and 70 miles north-northeast of Concepcion, one of the worst hit areas. According to the USGS event page, it occurred at about 3:30AM local time, with the epicenter about 21-miles below the ground, on the boundary between the subducting Nazca plate and the South American Plate (if you remember your plate tectonics). The earthquake prompted tsunami warnings around the Pacific Rim but the waves that materialized were relatively minor. As of Sunday night, the death toll for this earthquake is around 700. (Photo from the Daily Mail)

According to Geology.com, this earthquake was the 5th most powerful ever recorded. The most powerful earthquake ever recorded was the 1960 earthquake in Chile at 9.5 magnitude. Surprisingly, there was not as many casualties in the immediate vicinity of the 1960 quake as you would expect for one of that size.  The reason is that it occurred in the middle of the day and was preceded by a powerful foreshock that frightened people out of buildings, many of which were leveled when the main quake hit. However, some 2 million people were left homeless.

The resulting tsunamis from the 1960 quake were responsible for perhaps a larger number of casualties, including 61 people killed in Hawaii with wave amplitudes of 35-ft. 185 people in Japan were killed by the tsunamis, and 32 people in the Phillipines. Waves up to 1.7-m high were measured at locations along California’s coast.  All of these things put into perspective why they called for a tsunami warning around the pacific rim after this earthquake.

New research indicates that a tsunami as high as 8 m (26 feet) may have struck on Lake Geneva in the year 563 A.D. A large rockfall at the East end of the lake near […]