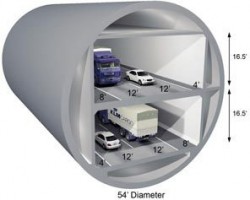 The $2B tunnel project for the replacement of the Alaskan Way Viaduct crossed a major hurdle with the approval of a document that will allow the environmental studies for the project to continue. Mayor McGinn’s position is that more time was needed to evaluate the document and he was concerned that a tunnel option was a predetermined outcome of the study. He went even farther by alleging that WSDOT and the City Council conspired to ‘violate the city charter [regarding separation of powers] and state law’. Nevertheless, Councilman Conlin signed the document allowing WSDOT to continue their progress towards a construction contract in early 2011. [Source: Seattle Times Newspaper. Image: Seattle Times]

The LA Times is reporting that the California bullet train project may be facing significant budget and schedule issues, largely because of a 13.5-mile tunnel beneath Pacheco Pass east of Gilroy.  The article reports that […]

The City of Fort Collins (Colorado) recently completed construction of a tunnel underneath BNSF Railway tracks to connect more than 30 miles of trails.  The prospect of tunneling under an active rail line is a […]