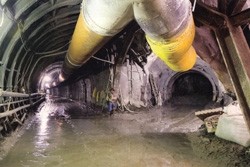 The San Francisco Public Utility Commission has a $4.6B program in place to try and make the water storage and supply system for the Bay Area ‘earthquake proof’ by 2015. It involves 86 separate projects, some already underway with others beginning in 2011. I’m not sure if the Claremont Tunnel Project is considered part of these projects, but it was designed to accommodate over 7-ft of horizontal offset on the Hayward Fault and not disrupt water flow in the tunnel. You can read about that project on GeoPrac. [Source: ENR via ASCE SmartBrief. Image: Sue Bednarz, Jacobs Associates, Inc. by way of Civil Engineering Magazine]

Mr. Taylor has also been named the leader of Hayward Baker’s Western Region Special Projects team, where he directs a team of engineers in the design and estimating of various ground modification projects in the western states and Canadian provinces. In addition, he has also been named a member of Hayward Baker’s Executive Committee. [Editor] Click through for the rest of the press release. [/Editor]

The Geotechnical Extreme Events Reconnaissance (GEER) Association published their report last month on the January 7, 2020, Puerto Rico Earthquake. Here is the summary: A seismic sequence located along the southwestern coast of Puerto Rico […]