SACRAMENTO, Calif. — For emergency planning purposes, scientists unveiled a hypothetical California scenario that describes a storm that could produce up to 10 feet of rain, cause extensive flooding (in many cases overwhelming the state’s flood-protection system) and result in more than $300 billion in damage. [Source: USGS Release, click for the rest of the release.] 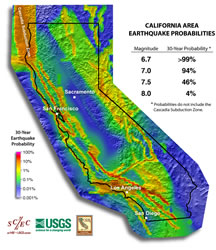