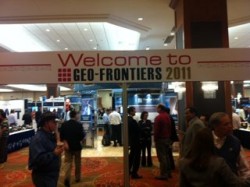 The Geo-Frontiers conference concluded last week, and according to their website, they had a record setting 1,900+ attendees! There are Day 2 and Day 3 videos from Magnus Media Group that have some nice interviews with G-I organizational members about the benefits of sponsorship. The Day 2 video highlight was probably some footage of the MSE wall student competition (complete with M.C. Hammer soundtrack!). And it appears (unofficial report here!) that the student team from Rensselaer Polytechnic Institute won the MSE retaining wall competition. Congrats guys! On Day 3 they interviewed the 2011 G-I Hero. Again, I’m disappointed I couldn’t make it this year, but I hope to see you next year at GeoCongress 2012 in Oakland, California!

Video Highlights of Day 1 of Geo-Congress

March 4, 2013 rockman Conferences Comments Off on Video Highlights of Day 1 of Geo-Congress

By the official videographers of the conference, Magnus Media.

So you’ve completed your field and laboratory geotechnical site characterization…now what? You write the report of course. This is the final video in a nice sequence of videos prepared by Terracon. Did you miss any? […]

Earlier this summer, there were several large landslides in B.C. Canada, including some with fatalities. Around that time, the landslide video below was captured by some boaters. [Source: WTVR.com]