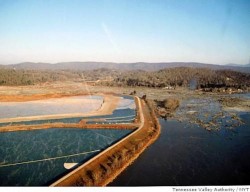 The forensic geotechnical engineer who investigated the Tennessee Valley Authority’s 2008 coal ash spill was called to testify recently at lawsuits brought by some 230 property owners claiming negligence on the part of TVA for the release of the coal ash sludge. He testified that a deep layer of ash slime was the primary cause of the failure.

He has said the slime tended to “creep” and add hydraulic pressures to the dikes and in earlier testimony compared it to yogurt that becomes fluid when stirred.