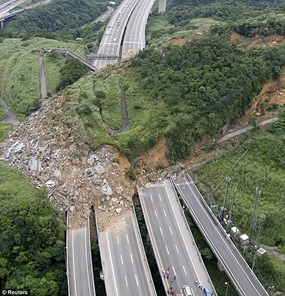 The failure mode appears to be a dip-slope type failure, possibly as shallow as 20-degrees and according to the MSNBC article, the failure was preceded by “days of rain” so the slope was likely at least partially saturated.

From Google Earth photos seen at Dave’s Landslide Blog, it appears the failure occurred on an engineered cut slope. And a Taiwan News article indicated that there were some kind of anchors stabilizing the slope, but there were comments regarding possible corrosion and age of the ground anchors. Likely the investigation into the failure will center around this issue.

A landslide in Logan Utah caused a portion of a canal to fail, causing a second mudslide. Three people, a mother and two children, were believed to be buried when the mud and debris hit their home. Rescue efforts were halted fairly quickly because of concern regarding the stability of the hillside. So far I have not read any reports that the bodies have been recovered. Map, Videos and more after the break. (Photo by Mike Terry, Deseret News, hat tip to Landslides Under a Microscope Blog)