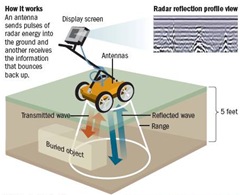 GPR is an increasingly popular geophysics tool for archaeologists to visualize what lies in the near subsurface thereby allowing them to fine-tune their excavation plans to more focused areas rather than an entire site. The Columbus Dispatch recently ran a nice article explaining to the lay-person what ground penetrating radar is and how it is used in archaeology. They also interviewed a local archaeologist who uses GPR and described how it was used on several local projects.

But I think the best thing about the article was the very nice figure showing the GPR being used, including the schematic, a sample radar reflection profile, an actual map produced from a gpr survey and the resulting exposed historic church foundations. A portion of the image is shown at left. Source: Columbus Dispatch.

A magnetometer and some batteries from the back of a stolen pickup truck belonging to Quantec Geoscience caused a bomb scare in Kamloops, B.C. last Saturday. The local police bomb squad thought it looked suspicious […]