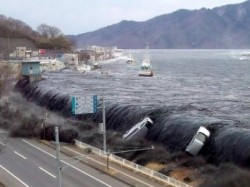 A seismologist at the University of Tokyo believes that the monstrous tsunami that was responsible for so much damage and loss of life during the 2011 Fukushima earthquake may have been a result of a submarine landslide the size of Paris. The researchers reached their conclusion by back-analyzing the wave motion measurements from buoys on the day of the earthquake. After modeling the size and approximate location of the landslide, other team members were able to compare bathymetry data from before and after the earthquake to locate the slide. [Source: Read more at Science/AAAS. Image: The Science Show]

By April of 2015, the contractor for Arizona DOT’s US 89 Landslide Stabilization project will have move over 1 million cubic yards of material to build a massive stabilizing berm. They are using CAT 773 […]

Amazing video of a rockslide as it happened yesterday along U.S. Highway 64 in the Ocoee River gorge in Tennessee. TDOT crews had almost finished removing rockslide debris from an event earlier in the day when a second slide occurred, blocking the road again. That looks like a pretty planar joint set dipping right into the roadway and everything was wet from the recent rains. Click through for the video.

There is a great collection of aerial photos and other photos from last week’s Bingham Canyon Mine Landslide at Kennecott Utah Copper’s Flickr Photostream. Thanks to my colleague Wolfgang Knudson at Golder for sending the […]