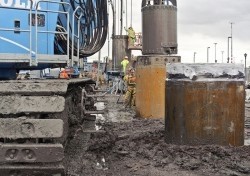 Drilled shafts have been installed by Malcolm Drilling to form the secant pile retaining walls to support the 400 ft x 80 ft x 80 ft launch pit for the SR 99 tunnel boring machine on the Alaskan Way Viaduct Tunnel Replacement Project in Seattle. Excavation has commenced on the pit in preparation for the launch of a world record 57.5-ft diameter TBM (until Russia launches a planned 63-ft TBM). The Seattle Times article indicates there are a total of 1400 drilled shafts in the pit walls and nearby, but a press release by WSDOT indicates the walls are comprised of approximately 200 drilled shafts. [Source: Seattle Times via ASCE SmartBrief. Image: WSDOT Flickr]