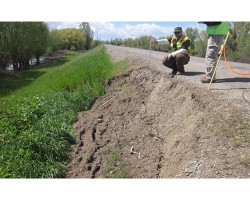 The Army Corps of Engineers announced last month that 17 levee systems in central California totaling 180 miles will be inelligible for federal rehabilitation assistance in the event they are damaged in a flood. This includes 40 miles of levees that protect Sacramento with a population of just under half a million. The reasons cited by The Corps included inadequate inspections and lack of detail in new state and local levee maintenance plans. It looks like the Corps is making a big point for levee owners across the country. But maintenance and inspections are difficult while state and local government budgets are shrinking. [Source: ENR: Engineering News Record. Image: ENR]

National Geographic has published an article on the New Orleans levee system entitled "New Orleans Levees, Are They Safe?".  The article indicates, as has been reported from other sources, that the levees are now back […]