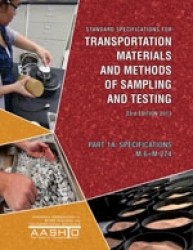 AASHTO’s Standard Specifications for Transportation Materials and Methods of Sampling and Testing, 33rd Edition and AASHTO Provisional Standards, 2013 Edition are now available for pre-order, delivery will start later this month. The 33rd Edition of the Materials Book contains 400 materials specifications and test methods commonly used in the construction of highway facilities, including 60 revised and 7 new specifications and test methods. The specifications have been developed and maintained by transportation departments through participation in AASHTO’s Subcommittee on Materials. [Source: AASHTO Bookstore. Image: AASHTO]

The NCHRP has released a new Subsurface Investigation Manual to update the 1988 AASHTO Manual of the same name. Imagine trying to capture every change in technology, methods, and approaches to geotechnical investigations from the […]

States Forced to Delay Millions of Dollars in Highway Contracts