The article indicates that the walls were necessary to allow for the construction of an additional runway to meet federal guidelines requiring separation of runways during bad weather. Previously Sea-Tac had to operate only one runway during bad weather (about 40% of the time!) causing delays etc. Over 16 million cubic-yards of fill were needed for the project, and the walls became necessary as environmental mitigation for neighboring wetlands and a creek as the footprint for 2H:1V embankments would have covered wetland area. The overall project cost is more than $1.1 Billion! 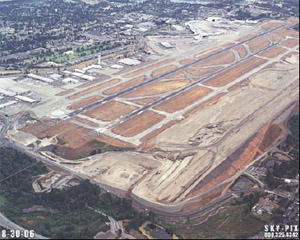 There are 4 tiers to the west wall, and the average wall-height is 74-ft with a total wall length of over 1,400-ft. The Reinforced Earth Company (RECo) was the designer and supplier of 5-ft by 5-ft cruciform shaped panels (Reinforced EarthÂ® system) with galvanized steel straps as reinforcement. One interesting thing I didn’t know about the project was that for that West wall, they had poor subgrade soils, possibly because of the neighboring wetlands. They had to overexcavate and replace 20-ft of material (mostly peat)! Our local contractors grumble about 5-ft of overex and recompact. To do the excavation they needed sheet pile shoring. (Photo by Sea-Tac Airport)

Other MSE Wall projects discussed in the article include a Tensar Mesa Retaining Wall System used at a new interchange for Interstate 24 at Manson Pike in Murfreesboro Tennessee (completed in 2004), and a couple residential retaining walls in Roseville California and Atlanta Georgia.

Thanks to Geosynthetica.net for finding the article.

TheNewsTribune.com has an interesting article on the Sea-Tac third runway project and how it is nearing completion and an overview of the hurdles faced. This was a unique project from a geotechnical perspective because in order to construct the runway, North America’s tallest MSE retaining wall at 130-ft high was built. One thing I didn’t know is that the 13 million cu-yd of fill needed to construct the runway needed to pass careful inspection to make sure it was free of contaminants and similar in mineralogical composition to the on-site materials. The implications and reasoning are explained in this quote from the article:

â€œWe had to find gravel that originated in the same place in Canada and that was transported here by the glaciers as the gravel that was here on the site,â€ said King.

The reasoning behind such a requirement is that water that leached through the fill would pick up minute traces of the minerals in the fill, drain into the creeks and confuse or damage native salmon returning to those creeks.

By way of ASCE SmartBrief.

Tensar announced that construction has started on $3 million worth of ARES MSE retaining walls on one of Ohio’s largest highway projects. 200,000 square feet of the mechanically stabilized earth retaining walls will be built […]

A retaining wall failed along the A13 autobahn in Schonberg, Austria. Few details are available at this point, but the wall did fall onto a passing truck, killing the driver. Snowmelt was likely a factor […]