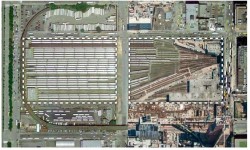 I love how the Atlantic Cities article starts, they use the phrase "only in New York", which is very appropriate in this case! Foundation drilling has commenced for a project that will create 26 acres of developable space by creating a deck over the top of a Long Island Rail Yard serving America’s busiest train station, Penn Station. Over 300 drilled shafts extending 90 feet down to bedrock will be constructed to support a continuous concrete deck that will span over the entire rail yard (check out the photo and video below!). High-rise buildings and other structures will be built over this deck to form the neighborhood that the developers are calling Hudson Yards. The area of the track where the 30 LIRR tracks converge into 4 lines that enter Penn Station will have a steel truss bridge with about 150 ft span length.

Centennial of NY Grand Central Station…And What the Future Holds

While the centennial of the GCT is being celebrated, a new project is taking shape approximately 90 feet below the existing tracks.  The East Side Access project (ESA) will provide a new connection from the Long Island Rail Road (LIRR) to GCT.  This project will help…

[Editor] Click through for the rest of this article, including a list of some interesting websites on Grand Central Terminal and the East Side Access Project. [/Editor]

Anderson Drilling has a unique tradition dating back to the founders of the compnay where they name most items in their fleet of foundation drilling equipment. They recently purchases a 48-inch Atlas Copco cluster drill […]