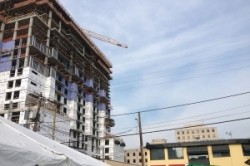 A developer will pay $3.2 million in damages plus $3.9 million in legal fees and expenses to the owner of a property that sustained structural damage related to the shoring of the developer’s adjacent 17 story apartment building in Bethesda, Maryland. Apparently the developer settled with the owner regarding the damages 4 days before trial in December of 2013. The details of the settlement were released in a court order last week that was associated with a hard-fought battle over the legal fees. There are undoubtedly other legal and insurance issues happening behind the scenes. The article indicates that the foundation and shoring subcontractor on the project claims the damage was caused by the August 2011 earthquake felt throughout the D.C. region. Regardless of what the geotechnical engineering issues are with the shoring system, it’s clear this has become quite a legal mess. [Source: BethesdaNow. Image: BethesdaNow]

Third-party reliance is a legal concept that is important for all practicing geoengineers to understand. We produce work products meant for a specific client and a specific purpose. But what if a third party wants […]

Thomas and Marker Construction won a $1.5 million lawsuit against Wal-Mart on December 23, 2008 through a unanimous jury verdict and court order in Federal Court in Dayton, Ohio. The lawsuit was related to unanticipated […]