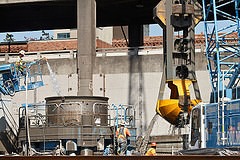 There hasn’t been much to report recently for the Alaskan Way Viaduct Tunnel Project in Seattle. As you probably know, Bertha has not advanced since about December of 2013 after drilling through an abandoned steel well casing left over from engineering studies. Whether it was the casing or boulders, or something else that damaged the seals around the giant TBM’s cutterhead, they have some major repair planned.  If you like, feel free to read more about what happened with Bertha.

WSDOT and Seattle Tunnel Partners JV (STP) announced a conceptual repair plan back in April. It involves creating a vertical access shaft approximately 80 feet in diameter, and 120 feet deep. STP member Malcolm Drilling is currently working on constructing I believe 5-ft diameter secant shafts to form the perimeter of the access shaft. The work is progressing a little slower than expected. The initial schedule issued by STP had the secant shaft wall complete at the end of July. It is now supposed to be the end of August, although they have said this won’t affect the overall repair schedule. You can watch a time lapse video of the access pit construction…pretty cool.

Another interesting item I found recently is a discussion of the cranes that will be needed to repair the bertha cutterhead. If you read my post on the tour I took of Bertha at her launch pit, you might have noticed a huge gantry crane in my photos that lifted components of the TBM into the launch pit for assembly. They will be constructing something similar at the repair site. However, first they need to assemble a 300-ton crawler crane beginning in September. The 300-ton crane will help assemble a 600-ton crawler crane. The 600-ton crawler crane will then help assemble the 2,000-ton modular lift tower (what looks like a gantry crane to my untrained eye). Talk about a heavy equipment ballet!

The $2B tunnel project for the replacement of the Alaskan Way Viaduct crossed a major hurdle with the approval of a document that will allow the environmental studies for the project to continue. Mayor McGinn’s […]

The Seattle Tunnel Partners JV announced last month that tunneling on the Alaska Way Viaduct Replacement project will resume a month later than originally planned. The Bertha TBM will resume mining on December 23 after […]