Steel augers reportedly from a piling operation at the ground surface broke through a railway tunnel in East London. Fortunately the train drivers noticed and reported the damage before any serious accident occurred. The busy […]

A new piece of equipment for deep ocean pile driving was recently used in 140m of water off the coast of Brazil. The StabFRAME is lowered to the sea floor and leveled to allow accurate […]

PITTSBURGH, PA – July 13, 2010 – Nicholson Construction Company is pleased to announce that Soletanche Freyssinet, a world leader in civil engineering and construction, acquired Agra Foundations Limited on June 25, 2010. Agra Foundations specializes in piling and ground improvement. Agra is headquartered in Edmonton, Alberta, and primarily operates in Western & Central Canada, where it has six office locations. Agra Foundations will continue to operate as an autonomous company, under the leadership of their President, Derek Harris, P.Eng, a 28 year veteran of the company.

[Editor] Read on for the rest of the press release from GeoPrac.net sponsor Nicholson Construction Company. [/Editor] 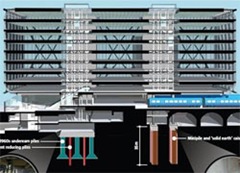 This has to be one of the most complex geotechnical engineering problems I’ve heard of for a building, if not for any kind of project. For starters, beneath the proposed 10-story office building referred to as Cannon Place lies the Cannon Street Train Station built in 1868. Also beneath the site are walls and foundations of a Roman Governor’s palace. In order to accommodate these features, the building has 21-m cantilevers at each end, with the load bearing happening over two groupings of columns at the 1/3 points. In section it looks quite like a 3-span bridge…without the abutments and stacked 10-stories tall! More after the break. (Images by New Civil Engineer) […]