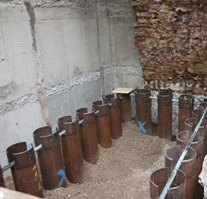 According to the New Civil Engineer article (via ASCE SmartBrief), each column must carry 1,600 metric tonnes of load (about 3,500-kips)! One set of foundations is composed of “solid earth” caissons, essentially a rectangle in plan view 3.5-m long by 2.8-m wide formed by up to 24 35-m long micropiles (or minipiles as they call them in the UK) along the perimeter of the rectangle with a concrete cap on top. The resulting caisson with a soil core acts as a single element to resist the massive 1,600-t load. A total of  11 of these caissons will support 30% of the building.

The other 70% of the building is supported on reused foundations from a 15-story office building that was originally constructed in the 1960’s. Those foundations are 2.1-m diameter shafts with massive 6-m square undereamed bases at the bottom. The undereamed portion (possibly the entire shafts) were hand-dug by miners. The loading back-calculated for the original 15-story building was about 300-t (662-kips) less than the new loading. So the existing caissons were augmented with “settlement piles”. These piles were designed to take up the additional load and included no safety factor. They were structurally connected to the reused caissons with a cap beam.

The piling contractor on the job is Expanded Piling and the lead geotechnical designers were Geotechnical Consulting Group.

The second in a series of videos by Terracon on the various steps of site characterization. If you are someone new to geotechnical engineering, these videos are a great overview of what we do! [Source: […]