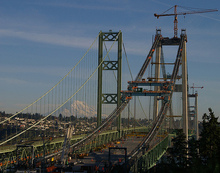 When you hear about the Tacoma Narrows Bridge, most people may think of the old Galloping Gertie footage (just for fun, I’ll add some video after the break). Of course the original bridge collapsed in 1940 shortly after opening. A new bridge was completed in 1950, and a second bridge was just opened to traffic on July 15, 2007. Gerard Buechel, the president of Shannon Wilson, examines the geotechnical challenges of constructing this massive bridge in an article post on DJC.com. Imagine constructing a 20-story reinforced concrete building, now imagine constructing it entirely under water! Read on for the link to the article and Galloping Gertie video. (Photo  by frarytd)