The LM was a unique vehicle because of the environment in which it had to operate. Its design involved many first-time engineering challenges. Because of severe weight limitations, design changes required considerable time and could not be made easily. As noted earlier, President Kennedy’s inadvertent compression of NASA’s original plan for lunar exploration diminished the usefulness of much of the data collected on the unmanned projects for the design of the LM. For example, the LM’s footpads had to be designed before an unmanned Surveyor landed on the Moon. Think of the LM as a structure with its four footpads as its structural foundation (Refer to Figure 1). To complicate matters, the lower portion of the LM had to serve as the launch pad for the top portion (Service Module) to blast off the surface of the Moon and return to the Command Module that was orbiting the Moon. In short, the footpads had to be designed to meet two criteria: (1) the LM could not settle more than a specified amount upon landing since the greater the settlement the closer the exhaust nozzle of the LM rockets got to the lunar surface (the exhaust cone is clearly visible in Figure 1 directly beneath the LM superstructure just beyond the astronaut), and (2) differential settlement between any two footpads could not result in an angular rotation greater than a certain critical value. The LM had to provide a stable, near-horizontal platform for the Service Module to be launched into an orbital trajectory so that it could rendezvous with the Command Module that was in a lunar orbit all during the lunar excursion. 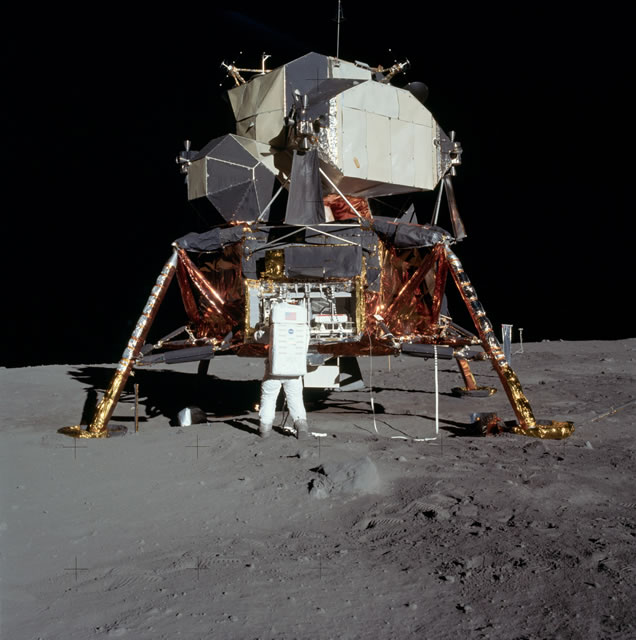 What a challenging geotechnical problem – no test data to design the foundations for a critical structure that would take two men to the Moon and carry them back to the Command Module for their eventual return to Earth! This mission carried with it the hopes of an entire nation; and it would be conducted in full view of the entire world! This challenge was the main reason why I took the job with Grumman, but don’t think for a moment that I faced these problems all by myself. There were many teams of scientists and engineers all over the country working on the unique problems associated with this project.

Geotechnical studies were being conducted by NASA scientists and engineers (e.g., N.C. Costas at the Marshall Space Flight Center, Huntsville, AL and W.D. Carrier at the Manned Spacecraft Center, Houston, TX) and by faculty at some of the finest universities in the country through NASA-funded research grants (e.g., J.K. Mitchell at UC Berkeley and R.F. Scott at Cal Tech). I was part of the team in Grumman’s Research Department. My colleague, Dr. Leslie Karafiath, and I were the only two geotechnical engineers on the Research Department’s team. Although most of the other members of the Research Department’s team were scientists, many of the members of Grumman’s Apollo Project design team were engineers. Incidentally, Les had over twenty years of geotechnical engineering consulting experience at that time compared to my none. To say the least, working with Les on this project was a great learning experience for me.