National Geographic has published an article on the New Orleans levee system entitled "New Orleans Levees, Are They Safe?".  The article indicates, as has been reported from other sources, that the levees are now back to where they were Pre-Katrina, but is that really good enough? A group funded by the NSF with members including UMR Professor J. David Rogers and Berkley professor Bob Bea has pointed out various shortcomings of the levee system. The Corps has responded with the view that the levee system is adequate, and that new flood gates will prevent a storm surge like Katrina’s from overtopping the existing levee system. 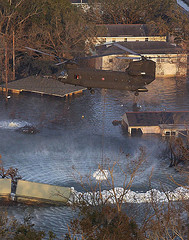 The US Army Corps of Engineers has issued a report that indicates the eastern portion of the levee system that protects Bernard Parrish will need to be raised by 11-ft to 29-ft to protect against the 100-year hurricane. Levees along Lake Pontchartrain were designed in the 1960s for what was then considered to be 200-yr and 300-yr hurricanes. Now they are judged sufficient for the 100-yr event. More at NOLA.COM.

Complete plans have not been released yet, but an environmental impact document outlines general plans for stabilization of the 17th Street Canal in New Orleans using Deep Soil Mixing techniques. Portions of the London Avenue […]

Residents of Iowa County were forced to evacuate as the swollen Missouri River caused a breach in one of its levees. What I found interesting was a description of a sand boil geyser: A Black […]