Probably the most effective method of making rock cuts fit into the natural terrain is to incorporate slope variations and grading features that cater to the long-range perspective. These techniques include major slope warping; expanded slope rounding; laybacks at intercepted drainages; ditch width transition variations; varying the slope angle and revealing important geologic features having topographic expression (such as erosion-resistant dikes or sills, or, in sedimentary terrain, ledge-and-slope topography); false cut embankments and median berms; and the application of rock stain.

Major slope warping (Figure 5) consists of varying the slope angle at the cut ends to provide a smoother transition to the natural terrain. The degree of warping can be defined through a slope offset and angle table, contour grading plans, or by providing an equation relating cut slope height, distance, and slope angle. The staking techniques involved are familiar to most contractors who build not only highways, but also golf courses, industrial parks, landscaped open space around corporate buildings, and similar features. 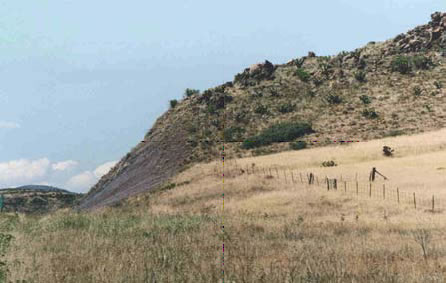 Figure 5 Slope warping on I-17 in Arizona

Expanded slope rounding (Figure 6) is mentioned here because highway standard specifications often do not require slope rounding in rock, or because the standard rounding radii tend to be small, if the colluvial cover is thin. By expanding the rounding of the slope crests, a smoother, more natural transition to the natural terrain is obtained. It is fairly readily done where colluvial cover is thin by providing a row of "satellite" blast holes behind the trim line proper. The rounding zone does not present rock launching features and is an opportunity for ledges and vegetation reestablishment. 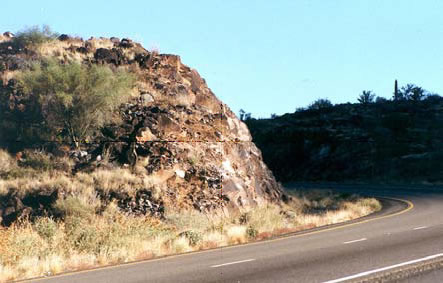 A very suitable land form replication technique in cut slopes is the creation of drainage intercept laybacks (Figure 7). On major roadway projects, rock cuts often pass through a series of ridges, without daylighting except that the ends. The topographic lows intercepted by the cut may be considered candidates for drainage intercept laybacks, even if no stream bed or stream sediment exists, because of the topographic variation. Providing drainage intercept laybacks is an extremely effective technique visually, because it breaks up the uniformity produced by the cut slope design template, and because it recognizes natural land form processes. The ditch line is maintained, and the slope angle is flattened in the vicinity of the intercepted drainage. 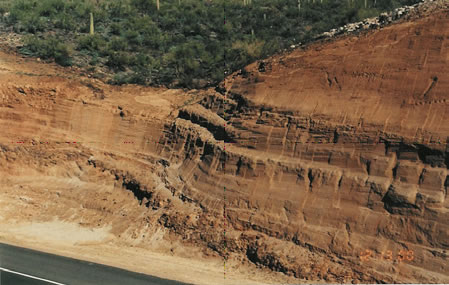 Ditch width transitions present an opportunity for slope variation at locations where the required cut ditch changes. Based on rock fall retention requirements, cut ditch requirements may vary through a cut, generally being the greatest in the center and the least at the ends (Figure 8). This can impart a concave appearance to the rock cut, which is unlike the convex features normally found in nature. Consequently, it may be effective to vary the cut ditch at the cut ends locally, to mitigate this effect. Slope angle variation is used in areas of long, monotonous cuts, at geologically significant locations, or drainage intercepts. 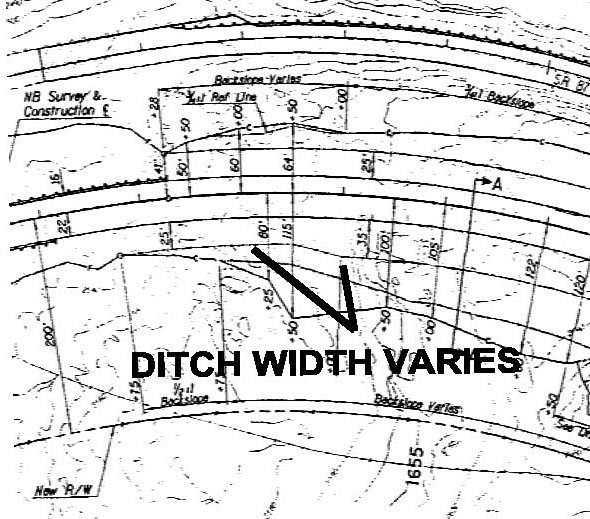 Slope angle variations can be most conveniently shown in the plans through a slope exception table, or a tabulation of station and offset to the slope toe and catch point. On the State Route 87 improvements in Arizona (Figure 9), slope angles were varied on a cut more than 100 ft deep in a variably weathered granite. This gave expression to prominent knolls that were formed along intrusive bodies and that presented contrasts in rock mass competence. Special blasting and staking techniques were used to reveal the resistant intrusive dikes and the cut slopes. The effect was to remove the sense of confinement within the rock cut, and to create a cut slope that effectively mimics the surrounding, rugged terrain. This project won a National Environmental excellence Award in 1999. 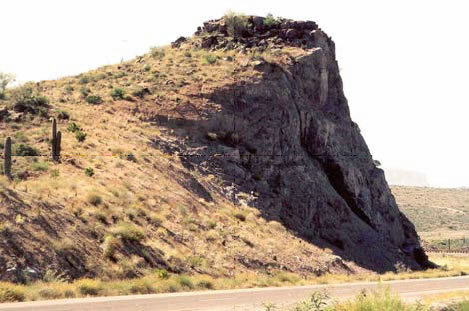 Along divided highways, leaving median berms (Figure 10) or creating false cut embankments in the median or shoulder areas can provide valuable screening and variety, as well as opportunities for revegetation and landscaping. It is important that adequate shoulder runoff and recovery width be provided, and that the features be designed and constructed such that they do not represent launching ramps for errant vehicles. However, if this is done, they can be economical because they reduce guardrail consumption and earthwork quantities. False cut embankments should not be left with a smooth, planar, or excessively regular surface (Figure 11, next page). 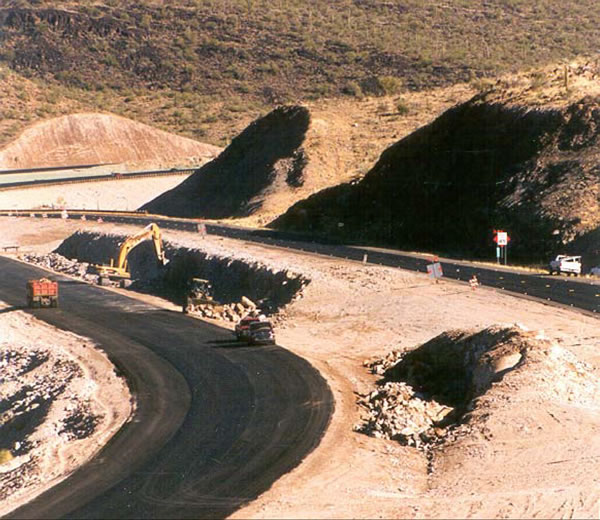 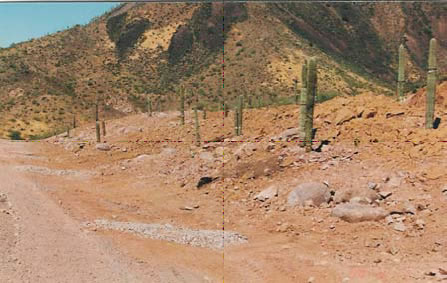 These larger scale enhancements are not only effective visually, in that they represent topographic variations that occur in the natural terrain, but they also can be shown on project grading plans, so the economics are improved. The quantities of excavation can be captured within the overall roadway excavation pay item; consequently, the construction of these features stems from the competitive bidding process. Rock staining is a significant visual enhancement for the long-range perspective. Especially in arid areas, chemical weathering of natural rock outcrops results in a dark coating, colloquially known as “desert varnish”. This coating may take thousands of years to develop. Most fresh rock cuts are significantly lighter in tone than the adjoining, weathered outcrops. Commercial desert varnish stain products can mimic the darkened surface in weeks. Some formulations leach natural minerals, others rely chiefly on their photoreactivity, and some are analogous to ordinary pigmented stain. Rock stain is applied by spray (Figure 12). Compare the fresh rock tone of Figure 12 with that of Figure 1, which is the same material after staining. 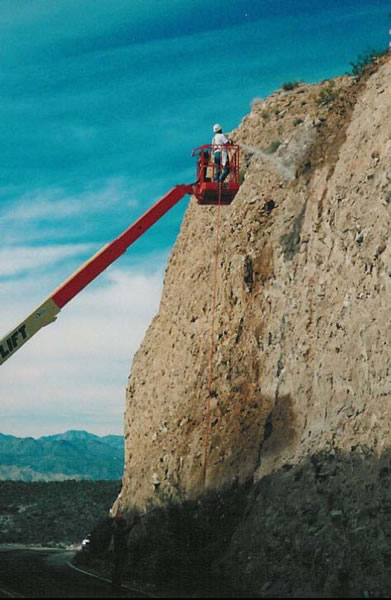 Figure 12 Application of desert varnish stain. The rock will generally darken within 2 weeks after application.

It is important to keep certain things in mind when considering desert varnish stain. First, not every stain will produce a color that is compatible with the surrounding landscape, and some stains are not effective on certain types of rocks, so it is critically important to prepare test panels for approval before full scale implementation. The stain concentration and formulation will vary the intensity and tone of the finished product, and multiple applications may be necessary. Also, it is important to fully scale the rock surface, to remove any masking by loose rock. Also, the performance period of the stain should be considered, and the degree of permanence of the treatment should be established. Weak rock, and rock that is absorbent, generally are not good candidates for the application of stain; results may be acceptable initially, but the degradation of the stain surface will gradually become apparent. Finally, the contrast between the fresh excavation surface and the natural surface may be due to vegetation cover, rather than rock weathering characteristics. In such cases, the application of rock stain may produce some improvement, but will not be entirely natural looking.

CHASM is an integrated slope hydrology/slope stability software package. The software has been written to assist in the estimation of controls on slope stability and to be of value to a wide range of potential […]