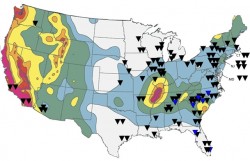 With the events in Japan on everyone’s mind, it’s of course to be expected that seismic safety at nuclear power plants in the U.S. becomes a hot topic. This article discusses how the Nuclear Regulatory Comission has an on-going study to assess the seismic hazard of existing and proposed nuclear power plants in the eastern 2/3 of the country, where the risk is greater than was originally thought.

Nearly six years before an earthquake ravaged Japan’s Fukushima Daiichi nuclear power plant, U.S. regulators came to a sobering realization: seismic risks to nuclear plants in the eastern two-thirds of the country were greater than had been suspected, and engineers might have to rethink reactor designs.

‘The Santa Clara Valley Water District has received preliminary findings from an ongoing seismic stability evaluation for Anderson Dam that detail part of the dam could experience “significant slumping” if a 7.25 magnitude earthquake were […]