The main focus of the article is on a proposed plan by the Governor of Washington State that calls for studying the feasibility of large scale dams in addition to other more environmental friendly options such as small scale dams,  desalination plants, pipelines from the mountains, and water storage in underground aquifers.

Also discussed in the article are some other locations throughout the Western US where large dams are being considered: 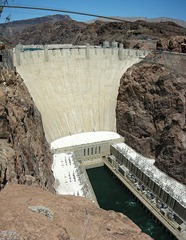 On September 30, 1935, President Franklin D. Roosevelt dedicated the Hoover Dam, telling the 10,000 people gathered at the ceremony that it was a “great feat of mankind” destined to reshape “the geography of a whole region.”  The American Society of Civil Engineers calls it one of the “Seven Modern Civil Engineering Wonders.” In honor of this significant milestone for this fantastic structure, I’ve collected some facts and figures, news articles, information on the bypass bridge, and some concerning news about the future of the dam’s ability to supply power.  Click through for more.

Two dams breached in Midland County, Michigan, causing flooding and the evacuation of 10,000 local residents after days of heavy rains. The Edenville Dam and the Sanford Dam both experienced “catastrophic dam failures” affecting the […]