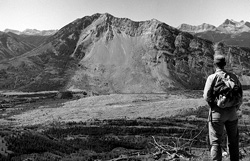 Fellow geo-blogger David Petley of Durham University posted today about the 105th anniversary of the Frank Landslide in Canada. The slide had an estimated volume of 30 million cubic meters and took all of about 100 seconds to travel down the mountain and engulf a portion of a nearby coal mining town. 76 people were killed, and a number of bodies were never recovered because of the massive amount of material. Since 2003, they have installed real-time monitoring equipment to warn if the mountain fails again, which seems likely based on an interesting video (requires Windows Media Player). It shows some of the massive tension cracks at the top of the limestone mountain. (Photo by Natural Resources Canada by way of Dave’s Landslide Blog)

World Cup 2014: a landslide affects the city of Natal in Brazil

July 1, 2014 rockman Geologic Hazards Comments Off on World Cup 2014: a landslide affects the city of Natal in Brazil

Torrential rain in the World Cup city of Natal caused a landslide right around the time that the USA defeated Ghana. According to the Landslide Blog, the landslide destroyed 50 homes but there were no […]