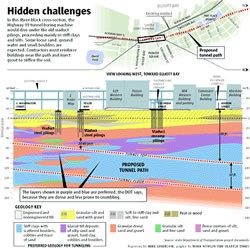 The proposed tunnel to replace the seismically deficient Alaskan Way Viaduct in Downtown Seattle is no stranger to controversy. This article highlights recent discussions regarding the cost of the project. Washington Governor Chris Gregoire declared last month “We have no cost overruns in this project at all, zero” and none are expected. Seattle Mayor Mike McGinn claims the cost overruns could be as much as $1.2B. The current construction cost estimate is $1.1B, and the total including design is estimated at $2B. This article has a nice discussion about some of the potential pitfalls that could cause cost overruns, although they appear to be some worst case scenarios in there. But I learned a great deal about surety bonds, sort of insurance policies for these large projects. [Source: Seattle Times Newspaper via CE News. Image: The Seattle Times]

Just 10m of drill and blast left on Gotthard Base Tunnel

This 57-km tunnel under the Swiss Alps has nearly broken through after 11-years of work. This tunnel will create a ‘flat’ rail path through the Alps and become the world’s longest rail tunnel. [Source: World […]

The International Journal of Geoengineering Case Histories has formally announced their second issue. Apparently when I posted about it previously, they had only two of the four papers.

This second issue contains four case histories that come with additional downloads. In particular, check out Dr. Edmund Medley’s Paper on the 2006 Hawaii Earthquakes. He has some neat  photos including some in 3-D (more about his 3-D photos).