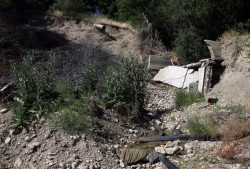 One year ago in Logan, Utah, a landslide caused a portion of an irrigation canal to fail, resulting in a secondary mudslide. A mother and two children were killed in the slope failure. Portions of the landslide area remain relatively untouched one year later as wrongful death lawsuits naming the City of Logan, Utah Department of Transportation, Utah State University are being resolved in court. Negotiations between family members and the private canal company could also end up in court. The City has acquired a number of the affected properties and hopes to turn the area into green space. [Source: The Salt Lake Tribune. Image: Rick Egan | The Salt Lake Tribune]

There is a great collection of aerial photos and other photos from last week’s Bingham Canyon Mine Landslide at Kennecott Utah Copper’s Flickr Photostream. Thanks to my colleague Wolfgang Knudson at Golder for sending the […]