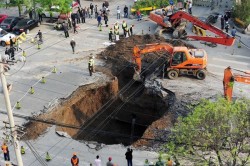 On April 26, a sinkhole opened up in a busy Beijing street in China’s capital city, swallowing up a truck. According to news reports, the driver and passenger jumped out of the vehicle before it fell into the sinkhole and suffered only minor injuries. The speculation is that the sinkhole was related to ongoing tunneling associated with Beijing’s subway system. Tunneling induced ground loss is always a concern for any tunneling project, but Chinese officials urged the public and media not to rush to judgement.

But Chinese engineers urged caution in jumping to conclusions: "It could have resulted from multiple causes," Wei Jinglian, a senior engineer from the Beijing Institute of Geology, told China’s Global Times. "Water leakage from old pipes underground may have softened the soil," Jinglian said, "or there has been too much pressure frequently on the same section of road."

In the media, the term sinkhole is used frequently, but more often than not, it is not related to the geologic term involving limestone dissolution in karst terrain, but often related to failure of "wet" utilities such as water lines, sanitary sewer pipe or storm drains. Even small amounts of water leaking over time can cause soil to migrate and a void to form, eventually giving way under the right conditions, like a heavy vehicle traveling over the roof of the void. And there are certainly wet utilities at this location as you can see from the photos. [Source: National Geographic via Geology News. Image: National Geographic]