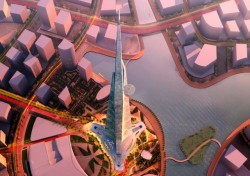 There is an excellent discussion of the geotechnical challenges, and really a synopsis of the entire foundation design process for the Kingdom Tower in the article from George Leventis, President of Langan International which is providing the geotechnical design.

The challenge with the Kingdom Tower foundation is to manage the settlement, resulting from the 900,000 ton building load, the one hundred yard foundation raft, and the very weak porous rock. Of course the building will settle. The goal is to make the settlement as uniform as possible. Differential settlement from one side to the other would result in a tilt of the structure. Excessive settlement from the center to the edge will induce huge structural demands on the foundation raft. The first step of the geotechnical engineer is to execute a thorough site investigation. For the Kingdom Tower, borings were extended as deep as 200 meters into the ground. Rigorous field and laboratory testing was performed to determine the strength and compressibility profile of the soil and rock materials. Two different finite element modeling programs were used to model the ground conditions, the applied building loads, and the support piles and predict the performance of the foundation raft. A full-scale instrumented pile load test program was performed in the field to confirm the design assumptions and refine the foundation model.

The Burj Khalifa is founded on pile supported raft foundation consisting of 194 bored-in-situ piles or drilled shafts as we commonly call them in the US with a 12 foot thick mat. The piles were […]

July 2, 2021 rockman Featured, Miscellaneous Comments Off on Foundations of the World’s Tallest Skyscrapers