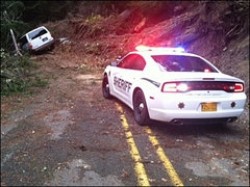 A thief stole a taxi at knife point in Brookings, Oregon recently, and then tried to escape when a police officer attempted to pull him over in the stolen vehicle. He ignored signs of a road closed due to a landslide, but quickly found out that the signs were no joke as his car collided with the mud, rock and debris from the landslide blocking the road. He was taken into custody without further incident. [Source: KOMO News. Image: komonews.com]

The USGS has a documentary on landslide video on landslide danger in the San Francisco Bay area entitled “Riding the Storm”. I think the target audience is more general than geologist or engineer, but it is still interesting. The bullet points from the USGS site:

Click through to view the trailer and for links to download the full video. (Image credit: USGS)

A group of villagers in an area Northwest of Bogota, Columbia were changing buses to cross a portion of road that was blocked by a previous landslide when they were caught up in a second […]