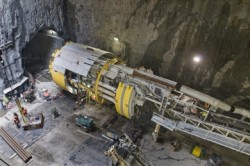 The new line will serve 200,000 riders per day when it opens in 2017. Total project cost is $4.5 billion. An interesting note regarding the tunnel boring machine itself:

The tunnel boring machine was originally manufactured by The Robbins Company about 30 years ago. It was first used to dig the MTA’s 63rd Street Tunnel in the late 1970’s and has been used on at least four other projects. The machine has been reconditioned and was rebuilt in Newark, NJ. The TBM was most recently used on the Fall River CSO Project in Fall River, MA.

Drill and Blast and Tunnel Boring Machine are two common types of tunnel construction methods. But roadheaders have been around for many years, getting their start in the coal mining industry. So where do they […]

May 7, 2009 rockman Project Related Comments Off on Voids Open as a Result of Tunneling Under Seattle’s Beacon Hill

On the island nation of Singapore land is at a premium, so a planned petrochemical storage facility is being constructed 150 meters under the sea floor. The article does not give the total underground storage […]