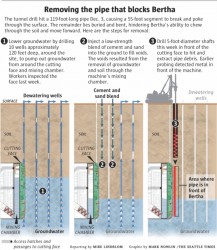 The Seattle Tunnel Partners JV is attempting to remove the rest of an 8 inch diameter steel well casing that has been blocking the Bertha tunnel boring machine since December 8, 2013. The upper 55 feet was removed earlier, but another 64 feet or so remains in the ground in front of the cutter face.

The team is using a drilled shaft rig to drill 5 foot diameter shafts directly in front of the TBM face to attempt to intersect the steel. The first two shafts were completed last week. The first one did not strike steel, I’m not sure about the second one. I believe they have two more to go. The shafts will be backfilled with concrete to help form a protective wall in case workers need to enter the excavation chamber just behind the cutter face. If the steel is encountered in the shafts, they will attempt to remove it using augers or clamshell buckets. The DOT press release seems to indicate that there may be more what’s blocking Bertha than just the well casing. We’ll keep you posted. [Source: The Seattle Times. Image: Mark Nowlin / The Seattle Times]

The WSDOT announced recently that the Seattle Tunnel Partners Joint Venture has requested a total of $188 million in change orders so far, and that the Department has denied $157 million of those, with $31 […]