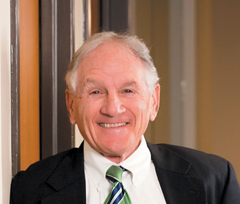 Litke was a member of the Board of Trustees of the ASCE /Geo-Institute’s Academy of Geo-Professionals from 2010 to 2013, and was recently awarded the title of Honorary Diplomate. He has been active on multiple industry committees for associations such as ASCE, ISSMFGE, AASHTO T-15, Geo-Coalition, USACE, OSHA/ADSC Alliance and others. He received USUCGR’s Research Achievement Award in 2004. In 2013 he was granted the title “Member Emeritus” by the ASCE/Geo-Institute’s Deep Foundations Committee.

A noted speaker, Litke has been the invited lecturer for numerous industry events including DFI’s Hal Hunt Lecture in 2002, Schnabel Engineering’s University lecturer, and most recently was the Keynote Speaker at the annual meeting of the Canadian Geotechnical Society’s Ontario Branch in 2011. In addition to Foundation Drilling magazine, Litke served as editor of several books and technical publications on foundation engineering as well as many articles and white papers. He received his Bachelor’s Degree from Ohio University and conducted Masters Studies at the University of Massachusetts, followed by further graduate studies at the University of Colorado.

Hawthorne, NJ (January 6, 2014): The Deep Foundations Institute (DFI) is hosting its seventh annual SuperPile conference on June 18-20, 2014 at the Hyatt Regency, Cambridge, MA. SuperPile ‘14 is a collaboration of seven DFI […]

ADSC Wants to Know What Concerns You the Most?

November 18, 2009 rockman Miscellaneous Comments Off on ADSC Wants to Know What Concerns You the Most?

Not in the metaphysical sense, but in terms of issues related to drilled shafts. Check out the survey on their homepage.

As part of an ongoing ADSC research project on axial capacity of drilled shaft rock sockets in the Southeastern US, several test shafts were constructed this past week and the load test portion will commence […]