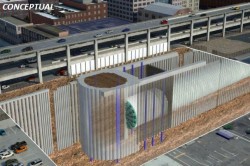 The Alaskan Way Viaduct tunneling project was in the news late last year when settlement of the Viaduct was reported during the dewatering efforts for the Bertha TBM rescue shaft. A recent post by WSDOT makes it clear that the settlement of the viaduct has been a problem for many years before the start of construction. The most recent round of monitoring by WSDOT began in 2001 after the completion of repairs to the the Viaduct following the Nisqually Earthquake. By 2006, a total of 4 3/4 inches of settlement had been recorded at one location. It appears that the rate of settlement is on the order of about 1/8 inch to 1/4 inch per year. I am sure the dewatering around the access pit didn’t help the problem, but it looks like it didn’t create it by itself either. This information just underscores the importance of the tunnel project to replace this aging structure. [Source: WSDOT Alaskan Way Viaduct. Image: WSDOT and STP via KPLU]

The $2B tunnel project for the replacement of the Alaskan Way Viaduct crossed a major hurdle with the approval of a document that will allow the environmental studies for the project to continue. Mayor McGinn’s […]

January 26, 2016 rockman Project Related Comments Off on Photos: Inside The MTA’s East Side Access Tunnel

The New York MTA’s East Side Access Tunnel Project is what I would refer to as a ‘Mega Project’. Any time you’re in the Billions of dollars range, I’d say that qualifies, and this one […]