A private homeowner’s retaining wall experienced a major failure near Colorado Springs, causing the evacuation of several families. According to KKTV, the homeowner obtained a permit to construct a 20 foot high retaining wall, however the wall stands at 36 feet high. As of Memorial Day, the three evacuated families have been allowed to return to their homes. The wall has now "completely fallen down." The original failure occurred after a period of heavy rain in the region. [Source: Read more at KKTV.com (Colorado Springs) via USGS Landslide Events. Image: CBS] 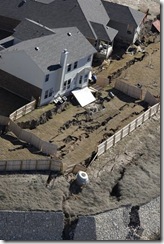 Retaining Wall Collapse on I-295 Project in Bellmawr, New Jersey

April 1, 2021 rockman Failures Comments Off on Retaining Wall Collapse on I-295 Project in Bellmawr, New Jersey

An MSE Retaining Wall suffered a dramatic failure last week closing the right northbound lanes of I-295 indefinitely. The wall is part of the Direct Connection Project to reduce congestion on I-295/I-76/Route 42 in Bellmawr, […]